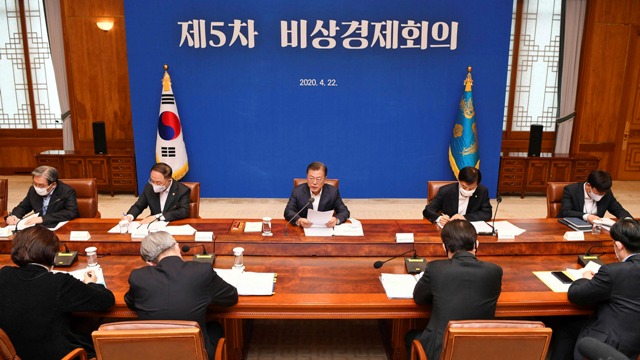 The South Korean government on Thursday called on North Korea to refrain from escalating tensions in the region, responding to a threat by its leader Kim Jong-un to strengthen the regime’s nuclear capabilities.

“Our government and the international community have maintained the stance that North Korea should stop all acts that heighten tensions, including the advancement of its nuclear capabilities, and return to the negotiating table,” a Unification Ministry official said.

On Monday, North Korea showcased a massive intercontinental ballistic missile and other strategic weapons at a military parade, during which Kim vowed to beef up the country’s nuclear capabilities at the “fastest possible speed”.

Kim also warned any forces that seek to violate the “fundamental interests” of the North will be met with its nuclear forces.

On the meaning of “fundamental interests”, the Ministry official said North Korea has often used the expression without elaborating, as Kim’s statement has added to rampant speculation on his intentions.

“It is considered to be used by the North as a concept with the existence of its nation and regime at its core value,” he said. Apparently, many observers say, regime security is Kim’s top priority.

No messages were directed at the South or the US in Kim’s latest public speech, the official noted.’

The North appears to have staged the military parade on the 90th founding anniversary of the Korean People’s Revolutionary Army (KPRA) to solidify internal unity under Kim’s leadership and stress his legitimacy, he added.

Another official told reporters on condition of anonymity the ministry is still conducting an analysis to confirm whether or not Kim has been promoted from “marshal” to “grand marshal.”

“Grand marshal” is the highest position in the North’s military held only by its late state founder Kim Il-sung and late leader Kim Jong-il.

Kim showed up at the night-time military parade in a white military suit wearing an epaulet with a grand marshal insignia on his right shoulder.