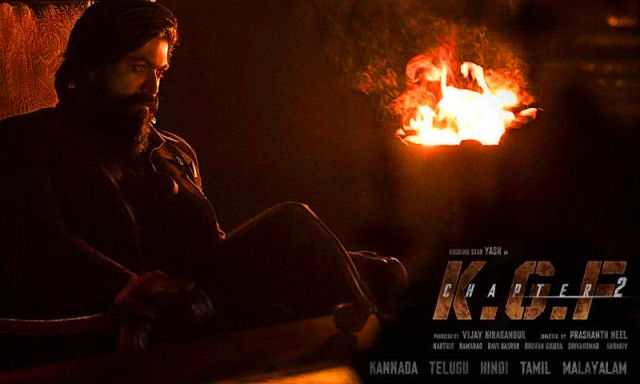 KGF: Chapter 2 has registered yet another ₹100-crore day at the global box office, minting ₹132 crore on its fourth day of release. The film has now taken its total earnings across all language versions to a phenomenal ₹551.83 cr. Moreover, as per trade analysts, this gross collection makes the film the second-highest-grossing film in the world over the recently-concluded weekend. KGF 2 was only behind Fantastic Beasts 3 in that list and ahead of Sonic the Hedgehog 2.

The film’s Hindi-dubbed version, too, has been shattering records at the box office. While the final figures from Sunday for the film’s Hindi version are yet to come in, it is expected that the film has grossed in excess of ₹180 crore, making it one of the highest-grossing films in Hindi for its opening weekend.

KGF 2 once again recreates the dark and deadly world where chopping heads and slitting throats is the norm. Gunshots are fired at whim and there’s no remorse in anyone’s heart. One of the finest sequels to have come out in a long time, KGF 2 takes off right from where the first part ended.

As Anand Ingalagi (Anant Nag), the author of El Doradao is hospitalised and can no longer narrate the story of KGF (Kolar Gold Fields) and rise of Rocky, his son Vijayendra Ingalagi (Prakash Raj) takes over. In his words, Raja Krishnappa Bairya aka Rocky Bhai has built an “indestructible empire” in KGF and wants to conquer even bigger things. While he has already killed Garuda in part 1 and turned ruler of the gold mines, in the sequel, he comes face to face with the deadly Adheera (Sanjay Dutt), who won’t let an outsider take over something that he helped build. Meanwhile, Rocky’s power-hungry games have also caught the attention of Prime Minister Ramika Sen (Raveena Tandon), who wants his downfall and death.

KGF 2 starts on a high note and dives into the stories of the characters it had well established in part 1. As the story unfolds, it brings in a lot many characters without interrupting the pace of the story or screenplay. Touted as a hard-core action flick, the way these scenes have been shot with so much detail, it creates a visual spectacle in its truest sense. While most of KGF world revolves around Rocky’s rise to fame and power, chapter 2 gives us a peek into his emotional side as well with a love story and flashbacks that keep reminding us of the reason behind what he does. KGF 2 is loaded with heavyweight dialogues, beautifully choreographed action sequences and larger-than-life characters, which you may not relate with but definitely enjoy watching onscreen.

Rocking Star Yash returns to screen as the raw and ruthless hero. He exudes machoism, makes bad look stylish. He isn’t your charming men types and doesn’t evoke sympathy even in the emotional scenes. He breathes life into his character and delivers his best. His lines, no matter how weird they sound, invite whistles and cheers and even in the most serious scenes, he triggers some laughter. Making him look even better and competitive on screen, KGF 2 introduces us to a ferocious antagonist in Dutt. Inspired by Vikings and known for his viciously violent acts, Sanjay aces as a menacing villain. Even in the limited screen time, he matches up to the crazy that Yash brings on screen. Their goosebumps-inducing action sequence towards the climax is worth every penny of that ticket price and has been magnificently shot. Raveena Tandon as the Prime Minister, delivers an earnest performance and just with a handful scenes, leaves a lasting impact.

Amid all these well etched out characters, Rocky’s love interest, Reena (Srinidhi Shetty) is somewhat the odd one out. I mean even if she wasn’t in the story, it wouldn’t really have changed much. In fact, there’s quite an irony in the character sketch she’s given. Rocky keeps her with him at KGF and calls her ‘entertainment’ but doesn’t touch her because he feels women and kids can’t be forced into anything.

Nevertheless, with so much to soak and enjoy on the big screen, KGF 2 is a perfect action potboiler if you have a penchant for such films. If you can’t handle too much action and blood, this world might not be for . But Yash is just unmissable.